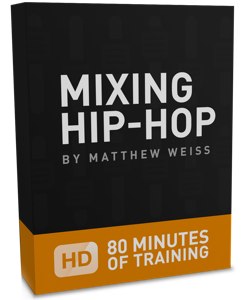 Recording and Mixing engineer Matthew Weiss has release part 2 of his Rap and Hip-Hop mixing tutorials: Mixing Hip-Hop. This 80min video focuses on mixing all the elements that make up the beat.

Matt has a great explanation of the package.

Mixing Hip Hop Beats comes out today! Just want to take a second to explain it. When Dan Comerchero and I first discussed the formatting of the tutorials we played around with the idea of doing “basic” and “advanced” tutorials. Ultimately I nixed the idea, because the reality is that 90% of a great mix comes down to the execution of what would be covered in the “basic” video. My goal is to explain a thought process to get the best out of the “basic” stuff – levels, EQ, compression, etc. The thought process whether you use basic techniques or advanced techniques is essentially the same.
Advanced techniques, conversely, are techniques that tend to detract from a mix when the basics aren’t covered. They really only need to be employed when the regular stuff doesn’t get the job done.

For me, instead of thinking “Basic” vs. “Advanced”, I think “Foundational” vs. “Case-Specific”. Or “things I will need to employ frequently” vs. “things that I will need to employ on rare occasion.” When put in that light, I think the advanced techniques become less appealing. And they should be less appealing. I consistently hear people who have all the craziest tricks and techniques in the world turn around sub-par mixes. And conversely, I hear guys who aren’t even really engineers, who are just doing basic stuff and really focusing on the music pump out mixes that are pretty darn good.

In this tutorial, I spend 20 minutes talking about setting levels. I’ve NEVER seen a tutorial on setting levels, and (imo) the most important aspect of mixing. But never discussed. That twenty minutes is spent examining the relationships between musical elements, assigning roles to each instrument, finding the rhythmic drivers, finding transition points, enhancing the movement of key musical phrases, and figuring out exactly what each element can contribute to the record. The subsequent sections with EQ, compression, distortion, etc – are all essentially just fine tuning what we get from setting levels.

It’s the “eat your veggies” approach, but hopefully it’ll get that information in circulation.