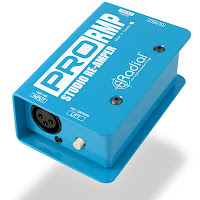 Re-Amping is a technique used by recording and mixing engineers to process recorded audio with analog hardware specifically guitar equipment.

In the direct box basics article I explained the use of a direct box in the studio, a re-amp box is used to take that clean direct guitar or bass signal and run it into a guitar amp if needed later on in the production process.

What does a re-amp box do?

The goal of the re-amp box is to make the amplifier react in exactly the same way a live guitar would, but with a pre-recorded audio source. Without the re-amp box there will be an impedance mismatch and loss of tone.Hearing your guitar rig play itself can take some getting used to!

Once you have the clean DI recorded, set the track’s output to analog out 3 of your interface (you will need an interface with more than just monitor outputs). No other tracks should be set to this output.  Connect output 3 of the interface to the Re-Amp box with a TRS to XLR-M cable. Connect the Re-Amp to your pedals or amplifier with a standard instrument cable. Check that you are getting a good signal to the amplifier, adjust the output level to match a live guitar input.

If the signal is noisy, try the ground lift switch.

Record the amplifier as normal with one or more microphones.

Double check your routing to prevent feedback.
Why Re-amp?

The decision to re-amp could be for a number of reasons:

While there are many fancy direct boxes, if you are planning on re-amping you will likely find the best results are achieved through the simplest direct capture. A Tube DI or Tube preamp may be too colored and change the sound of your amp. Warming up the sound of the mic on the amp, rather than the DI is the better option. Feel free to experiment of course.

Usually the signal you send to the amplifier will be completely unprocessed, however you may wish to experiment with gating, light compression, and EQ.

Much like the way your guitar volume affects the character of the amp, sending the right level out of your DAW can be critical.