I was at the downtown Vancouver Tom Lee Music today to browse the guitar gear. I posted a pic on instagram of the Mesa Mini Rectifier head and had a few people ask for a review, so here are my thoughts after playing though it about 10-15 minutes.

I first went into the iso booth to try out the Fender Blues Jr III, a pretty well respected tube combo. I didn’t care for it, I didn’t try it with any pedals but I just found it’s tone to be be very painful in the highs. With the gain up, the overdriven tone just didn’t have a character that I found appealing. 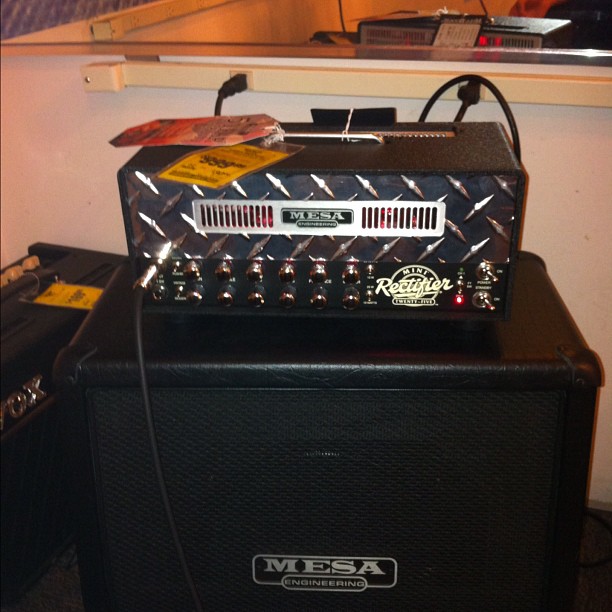 The Mesa Boogie Mini Rectifier was also in the booth, it’s out of my price-range ($999.99) but figured I’d give it a try. It was connected to a small cab which I assume is an oversize 1×12. The mini Rect is a 25-W 2-channel head with two voicings per channel. Each channel has gain; treble; mid; bass; presence; master volume; and 10/25W switch. Channels are foot-switchable and there is also an FX loop.

Channel 1 can be set to ‘clean’ or ‘pushed’ voicing. Clean mode was a nice but very plain clean tone. Pushed ranges from an edgier clean to very cool crunchy tones. I preferred Channel 1 on 10W as it helped get that crunch tone at lower levels.

Channel 2 can be set to ‘vintage’ or ‘modern’. Vintage mode is a higher-gain sound that I didn’t really care for but would probably work great in a mix. The modern mode is very high-gain, bright, thick, and compressed. Modern mode sounds best in 25W. 10W sort of clips the sound and makes the tone very hard in a bad way.

The modern mode was by far my favorite. It begs you to play power chords. I was playing punk/hardcore riffs on an HH Telecaster and it sounded great. Rolling back the volume on the guitar does not really clean up the tone like other amps do, which is about the only complaint I guess. Modern mode is less dynamic than the other modes.

Overall, it’s a cool amp that does in no way sound or feel cheap. It’s not the most versatile amp but it sounds and feels way better than any software version of a rectifier I’ve tried. It’s a small amp but still quite loud too, I had the master on about the lowest setting and was probably hitting close to 90dB in the booth. I wasn’t really able to push the power tubes because it was just too damn loud. I liked it but wouldn’t buy one myself.