This is the first post from contributor Connor Hayes. Connor will be writing reviews and other articles for Audio Geek Zine. He uses Cubase, but otherwise is a nice guy.

INTRO
You will have to forgive me. Apparently my sense of time is completely useless because I still thought Auto-Tune Evo was new – that is, until the nice man at Antares informed me that it came out years ago. 2008 to be exact. Regardless – I still felt it was worth reviewing because I don’t hear Evo being talked about too much and I feel that it is a very important plugin. A lot of people seem to have a problem with tuning vocals, they think it’s cheating, or what have you, but I couldn’t live without it. To me, it’s the best way to focus on the attitude and the vibe of a performance, and if the notes are a bit off, you can fix them right up. It’s also the ONLY way, to me, to do a lot of layering in any reasonable amount of time. 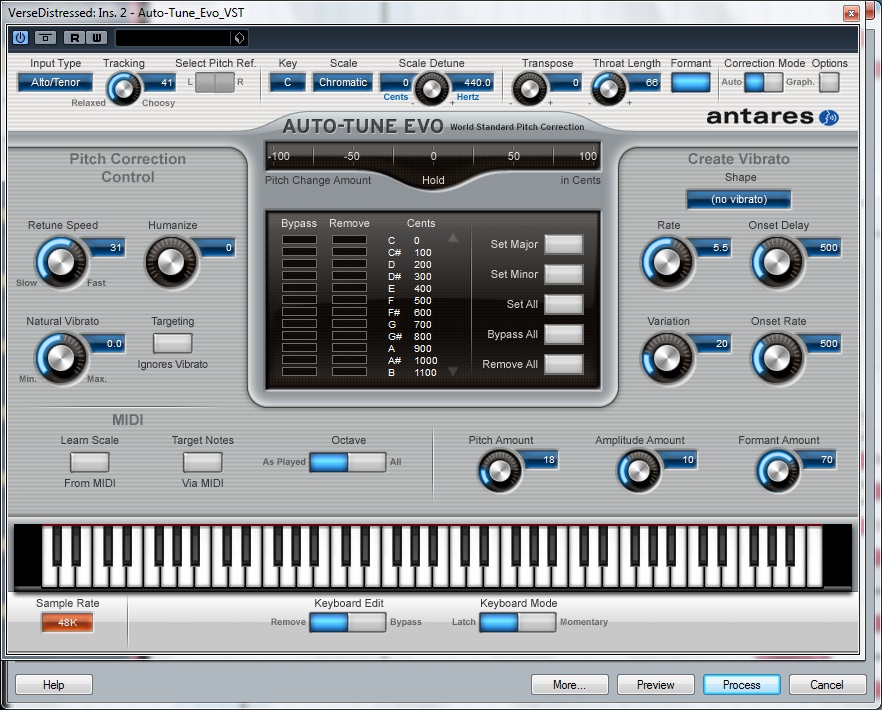 Auto-Tune can be as transparent or as obvious as you want it to be – it’s all in how you work the retune speed. Auto mode on 0 (zero) retune speed will obliterate any trace of natural vibrato, or you can manually tune each syllable with whatever retune speed you need for each one, and it can tune up your vocals without leaving a trace.


AUTO TUNING
Pretty straightforward here – you still pick a voice type, the key of the song, and a retune speed, and you are good to go. I do have to thank Antares for putting the choosiness/tracking knob back on the front panel for this version of Auto-Tune – It was there in 4, gone in 5, and now it’s back again. It was a real pain to have to keep going to the settings over and over again in Auto-Tune 5 to change the choosiness.

There’s also a new “Throat Length” slider, though I personally haven’t found much use for it. It can change the character of the voice in a pretty cool way, but not in an exactly usable way – at least on the vocalist I was using it on for this review. I know him very well and hear his voice on a very regular basis. I think that if I didn’t already have a really solid idea of what a particular person was supposed to sound like, this could be used to great effect. It also might be useful when you are dealing with a voice that has a particular character you don’t like(or one that you have messed up by using too large a pitch shift), or if you are trying to create an entirely different voice, like for a cartoon.

All the other usual suspects are here still – scale detuning, create vibrato, target via midi, etc. I never use that stuff myself but it is still all there for anyone who needs it. It will also still tune up an out-of-whack bass guitar just as well as previous versions. I have even used Auto-Tune 5 to tune an out-of-tune guitar lead in the past, I’m sure Evo will do it just as well, if not better.

GRAPHICAL TUNING
The improvements to manual mode are simple but incredible – being able to change the retune speed for each note and being able to have a visual preview of what your tuning is going to look like is a GODSEND. Auto-Tune Evo actually makes tuning vocals a joy. You go in, tune a note, pick it’s retune speed, then move on to the next note and do the same. I would say that those two improvements alone speed up my workflow at least 25% – there’s no more guesswork involved anymore. I do wish that the “track pitch” button also cleared the window – that would mean one button click instead of two every time you tune a new phrase, but maybe Antares has a good reason that’s going over my head for this.

In addition, there’s “input pitch” and “output pitch” indicators, which show you in even more detail what you are doing to the voice. I love it.

There’s also a new “make notes” button which is reminiscent of Melodyne – you can drag and drop your notes/syllables, which I personally do not have much use for but it would definitely be nice for figuring out harmonies the lazy way or even trying out new melody ideas that might not come naturally.

OVERALL
There’s also some smaller but useful improvements such as the ability to resize the window, which is nice for tuning long passages or passages that go really low and really high – however, I found the “presets” for sizing to be pretty useless, at least at 1280×1024.

As far as CPU usage goes, and this was a surprise to me, it actually does use a bit more(at idle, at least) than Auto-Tune 5. I can only run about 140 instances of Evo before my system starts to bog down, whereas with Auto-Tune 5 I can run over 240. My machine is an Intel i5 750 with 4GB of RAM. However, this shouldn’t be an issue, because you don’t have to run the plugin in real time – I suggest manually tuning each line individually as an offline process.

All in all, I applaud Antares. This latest rendition of Auto-Tune is by far the best one yet. It’s more useful, easier, and downright more fun to use.