The majority of my freelance audio work comes to me through the internet from all over the world. It’s maybe 1 in 10 projects that I do for musicians in my area. When I’m recording it’s usually overdubs. Recently I had the pleasure of tracking a 3 piece band live in another studio. That’s not sarcasm! I really do love working with people in real life, setting up microphones, and making loud noises. I don’t get to do it nearly enough. Thinking back on this session, a few important topics come to mind that will help you get through your next (or first) tracking session. 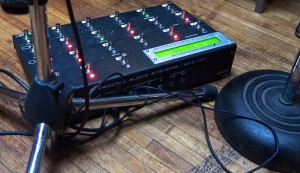 What was happening? I was listening to the same mix as them off my interface, but I did not check it on their headphones. As a result, their mix was totally distorted from driving the input of the headphone amp too hard. They messed up by not telling me it sounded like shit until 4 hours into the second day of recording. Note to musicians – speak up, the headphone mix must sound good, tell the engineer if it doesn’t. I only found out the mix was jacked because I heard the bassists headphones buzzing when he was in the control room for an overdub. The point here is that you need to listen to the musician’s headphones to adjust their mix correctly.

Contracts
I don’t always use contracts, in this session I’m glad I did. It was great to have everything in writing and agreed on, simply because it gave me the power to say ‘No.’ If it’s not in the contract I don’t have to do it. The price and terms were set, all in plain English. There were a few important points in the contract.

If the idea of ‘fix it in the mix’ came up I could shoot it down. “Nope, not in the contract, you have to do another take.” This is not me being lazy, this is quality control.
In case you’re wondering, I did say ‘Yes’ much more often than ‘No’ in this session.

Something will go wrong
Aside from the headphone mix issue, my mobile DAW system caused a lot of frustration with intermittent glitches. I thoroughly tested the system at home before the session but issues still came up. Now I can’t recommend OSX Mavericks for audio. We also had a phone go off in one of the best takes. The bass player had tape all over his fretting hand to keep from bleeding everywhere. Worse things can and do happen! You just have to stay positive, keep the morale up and work around the issue.

Know when to move on
With that said, sometimes you just have to give up. One song the band was recording has a drastic change in feel between verse, pre-chorus and the chorus. It was a train wreck every time. If they did make it through then the tempo would be way off. Most takes are incomplete.
We gave up on this song early on the second day and came back to it at the end. On the first take of the second attempt a guitar string breaks. Fix that, computer glitches, try with a click track and without, it’s just not working.
I try to keep it positive for them. We DID get through 19 other songs, and we started late on the first day and went home early. This one song needs more work and now is not the best time. Time to pack up and go home.

Anyone can mic a snare drum, that’s easy. Recording sessions are less about the equipment you’re using and more about working with people. That is the priority on these projects, keeping everyone happy and playing their best. You can’t fix that in the mix.

Published in Things I have been working on and Tutorials