It’s pretty amazing how many different options we have for Tubescreamers these days. There’s the classic TS-808, TS9, the TS7 which I just bought last weekend, then there’s Screamer emulations in every virtual guitar amp package and then there’s the boutique and modded screamers. Ibanez even has 5 different Tubescreamers in production today. They all sound different! Every guitarist and studio engineer has one version they swear by.

A Tubescreamer can be used as a distortion pedal of course but it’s most used as a way of tightening up the bottom-end of an amp and to push an amp into distortion while still maintaining the character of the amp. The circuit includes a high pass filter which makes a huge improvement in tightness of palm mutes, it also has a midrange hump that adds clarity to picked notes. To learn more go here.

Today I spent some time shooting out my Ibanez TS7 pedal with my CMATMods Tube Slammer (a boutique pedal based on TS-808 circuit with upgrades). Since I put that effort in I figured I’d continue and run my software versions through the same tests – Amplitube, PodFarm and GTR. 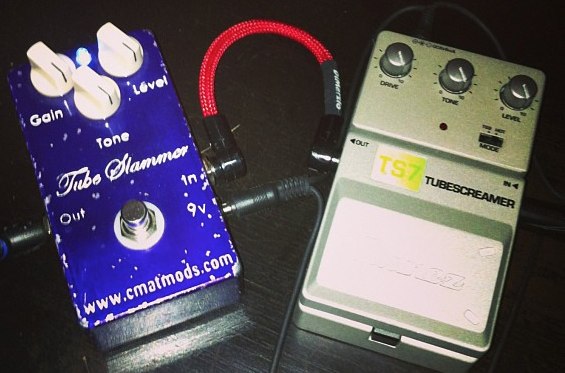 Audio Examples
There are 19 clips below (or download all the clips in one zip). The first is the direct guitar played through Amplitube (Jet City JCA20 head + HiAmp Cab). The guitar gain is rolled down a bit in the first half. The real pedals were reamped and rendered with the amp sim. All clips have the same virtual amp with only the pedals swapped OR settings changed. A stereo drum track plays with the mono guitar.

I made clips of 3 different knob settings for each:
Setting 1 is 0% gain, 50% tone, 50% level (no boost, just tighter lows)
Setting 2 is all knobs at 50% (medium clipping distortion)
Setting 3 is all knobs at 100% (lots of distortion, boosted highs and boosted ouput level)
The TS7 has two modes so there are clips of each.

Original guitar with no Screamer 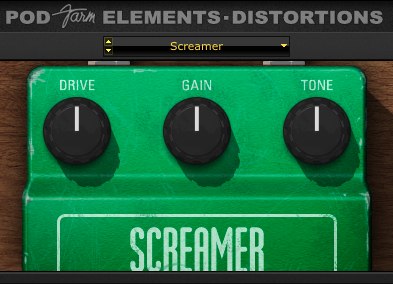 Reviewing the sounds
As you can hear, each version has a similar but distinct sound. Between the two hardware versions I preferred the TS7 for it’s more aggressive sound (steeper HPF) and the HOT mode makes it like two pedals in one. The Tube Slammer doesn’t filter the lows as much, the clipping is smoother. The Tube Slammer is much less noisy than the TS7 but also has a little less edge on the pick attack.
Out of the Software versions I prefer the Amplitube version. To me it sounds most real and smoothest and nearly identical to the TS7’s TS9 mode. The PodFarm version is most saturated and thin at the highest settings. The GTR is the one I’m least likely to use, the mid-bump makes it sound like a a wah pedal was left on.

There are so many other options out there but for now I’m happy with both of my pedals and Amplitube.
Do you hear the same things in these clips that I do? What’s your favorite?