Way back in July 2012 I was told about a pricing mistake at Musicians Friend for the Auralex MudGuard. It was actually a 4-pack of them for $110, just $11 more than a single unit. I don’t know if it was an error or just clearance but it seemed like a pretty good deal. I told some friends and got a little group buy going with 3 guys in California – Eric @rhythminmind; Cory @createmusicpro; and Andrew @cremasterandroo
Cory made the order and got them a few days later. After he shipped mine to me in Vancouver from Orange County I owed him $68. Still less than buying one in store or any other competing product.

Off-axis microphone isolation
If you’re not familiar with this sort of product, it’s a barrier that mounts behind a microphone intended to reduce the pickup of off-axis sounds – noise, other instruments, or reflections from the room. A compact portable vocal booth is the concept.

There are several of these on the market in a wide range of prices. The SE Reflexion Filter was the first of these products to my knowledge. That one is certainly a more sophisticated design then the MudGuard, however in my previous experience with the SE, it wasn’t worth the effort or high cost.

Opinions vary greatly about their effectiveness and value in the studio. In every discussion I’ve read on these there’s always some guy that claims he can build one himself for $10. I’ve never seen a DIY option that didn’t look like a steaming pile. My own attempts at a DIY stand-mounted absorber have been garbage, definitely not something I’d want to be seen in a paid session.

Peer review
Cory got his first and posted some positive comments on Twitter about the MudGuard for vocals and acoustic guitar.

Testing out the @Auralex Mud Guard. As a skeptic, I have to say that I’m pleasantly surprised.
No miracles, but there is a noticeable rejection of room & tightening of presence. I’m testing rock vox & acoustic gtr
Yesterday I tracked classical guitar with the mud guard with some success. I had to add a packing blanket behind and Two portable absorbers to the sides, but I was happy with the results. It’s not “amazing” but I like having it as an option.
4 loud rock vocals it cuts the room a little in a good way, but I was 14″ from mic

Eric was next to report with mixed results.

Auralex MudGuard Test in untreated room #micporn http://t.co/RjRHloiV
I tried it out this morn, works pretty well for cardioid. Not so well with a figure 8 Ribbon
Here is a quick recording test I did this morning with the MudGuard rhythminmind.net/1313/?p=3951

He’s being too nice about the ribbon mic results. Absolutely terrible. Turns out putting a barrier near the back of a ribbon mic is the worst thing ever.
In his examples of the cardioid condenser I heard a reduction in ambience through the MudGuard, which is the whole point of the thing. I also heard a reduction in low frequencies in his voice when using the MudGuard, however I’m not confident that is completely a result of the MudGuard, there are a few other variables.

As for me, I’m not very impressed with it. I don’t hate it but I feel like I have to tear it apart a little. The overall construction quality was lacking with a poor glue job and cheap metal as you’ll see in the photos below. 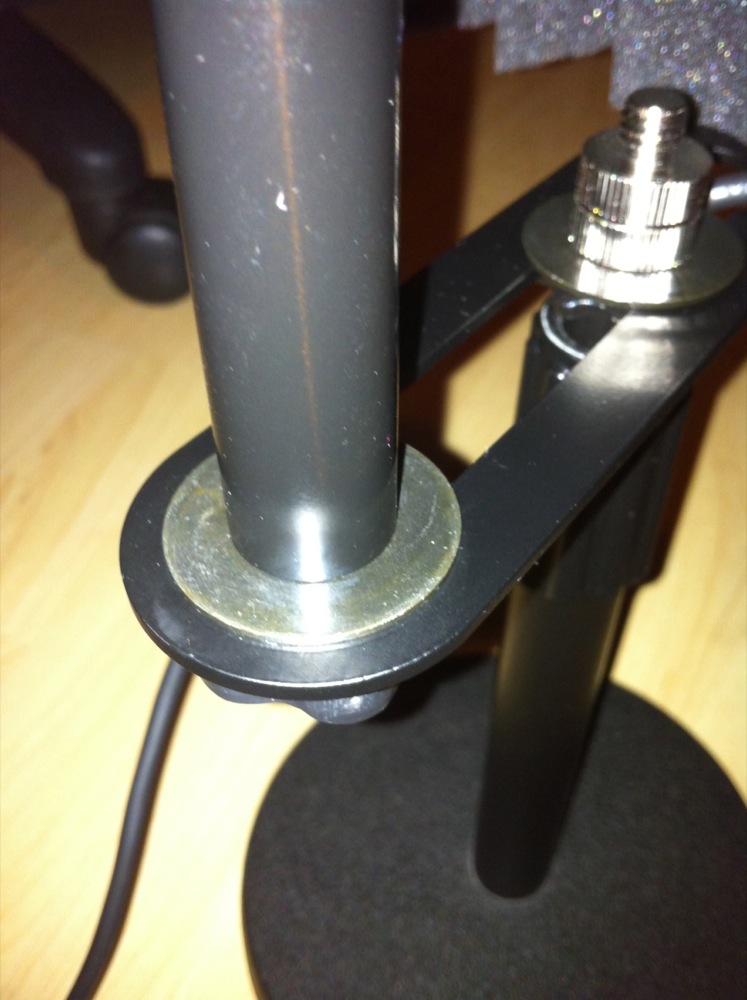 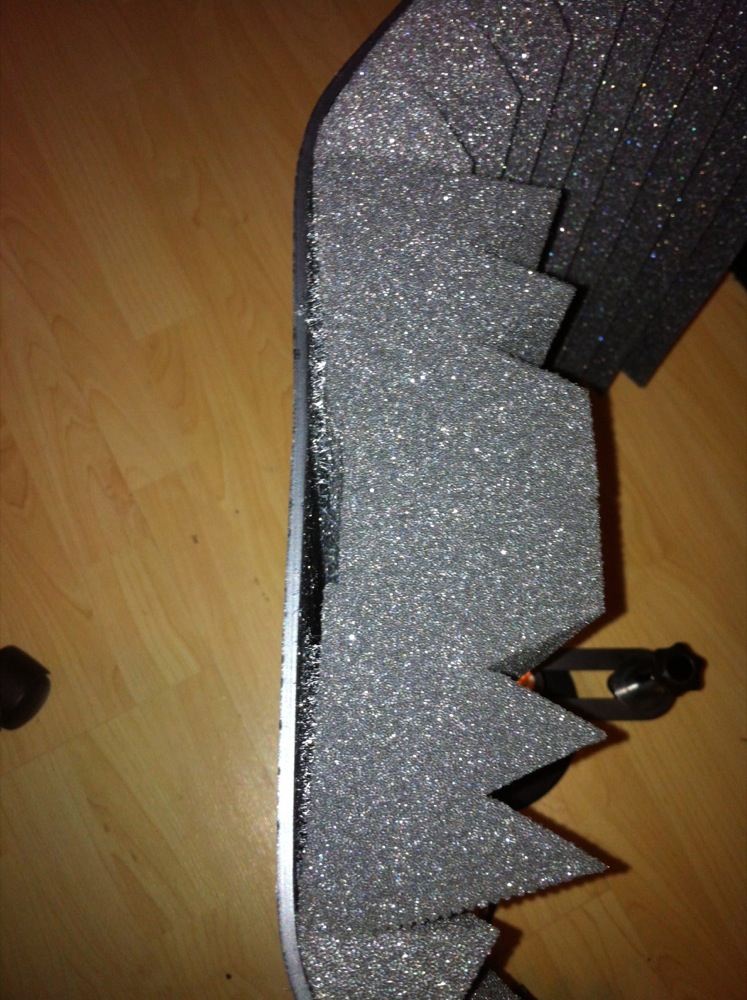 The claims
Here’s what the Auralex site says about the MudGuard :

The Auralex MudGuard isolates your mic by eliminating external noise bleed and filtering out external overtones. This design is engineered for maximum effectiveness using Studiofoam to reduce excessive room ambience and off-axis sound.
Mounts easily to most microphone stands and clips.

I’ll break that down into points:
1. …isolates your mic by eliminating external noise bleed…
“Eliminate” is way too strong of a word, but it does block external sound by a noticeable amount.
2…. filtering out external overtones…
If by overtones they mean harmonics then this makes no sense
3. …engineered for maximum effectiveness…
Mine appears to be quite poorly constructed honestly. Rough plastic edges; exposed beads of glue, still sticky; the foam is coming off in the middle section; the Auralex logo sticker was askew; threaded parts fit poorly together.
4. …using Studiofoam…
Well there’s your problem right there
5. …reduce excessive room ambience…
True, the pickup has less ambience
6. …and off-axis sound…
It does reduce off-axis pickup, but not without tradeoffs
7. Mounts easily to most microphone stands.
It’s not too bad in this respect. The Reflexion Filter is very frustrating with it’s bulky (but rugged) clamp mount. I’ve tried dozens of ways to mount the mudguard including hanging it upside down and keeping the mic on a separate stand. These products never seem to take into account basic physics and wind up with a clumsy mounting bracket that sags or gets in the way of mic placement.

Conclusions
With all that said, it’s still a step up from the DIY attempts I’ve seen, including my own. It’s moderately compact, it does block some external noise. It does have some usefulness. I’ve been using it for all vocal sessions here since I got it and have been happy with the results. 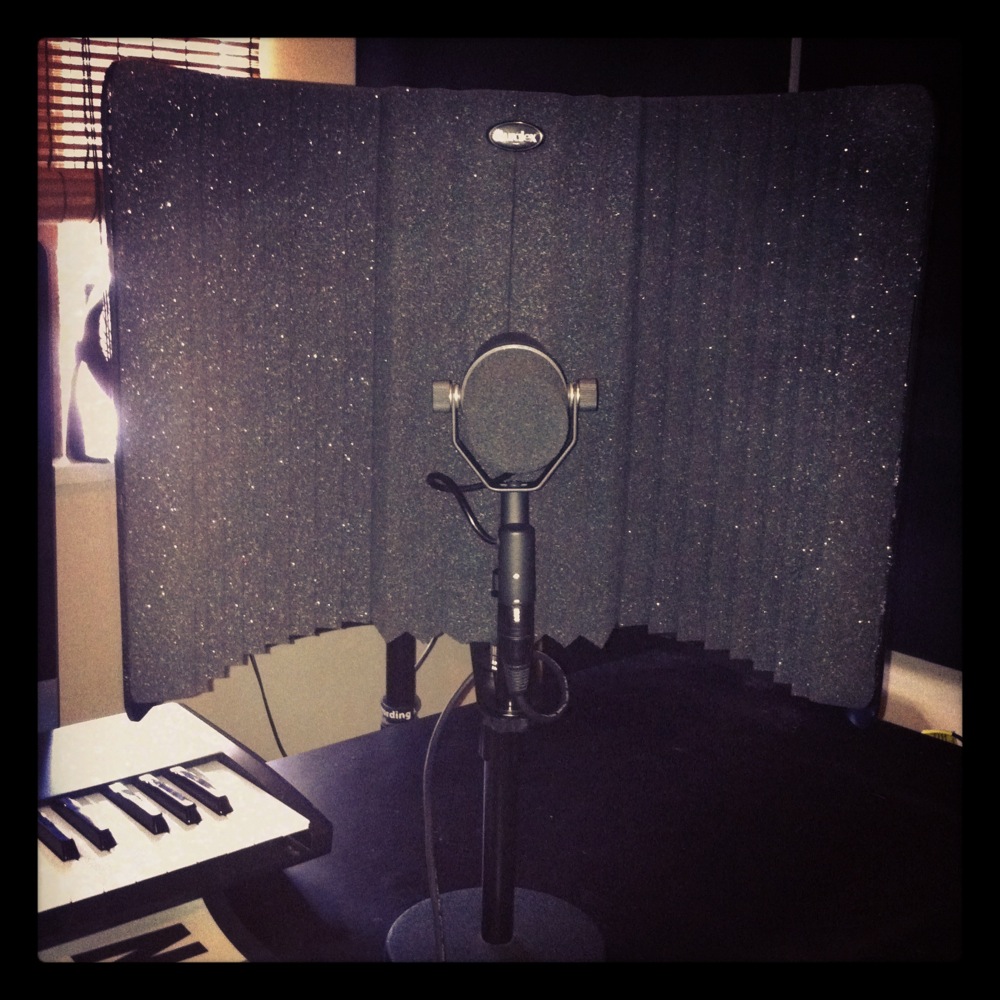 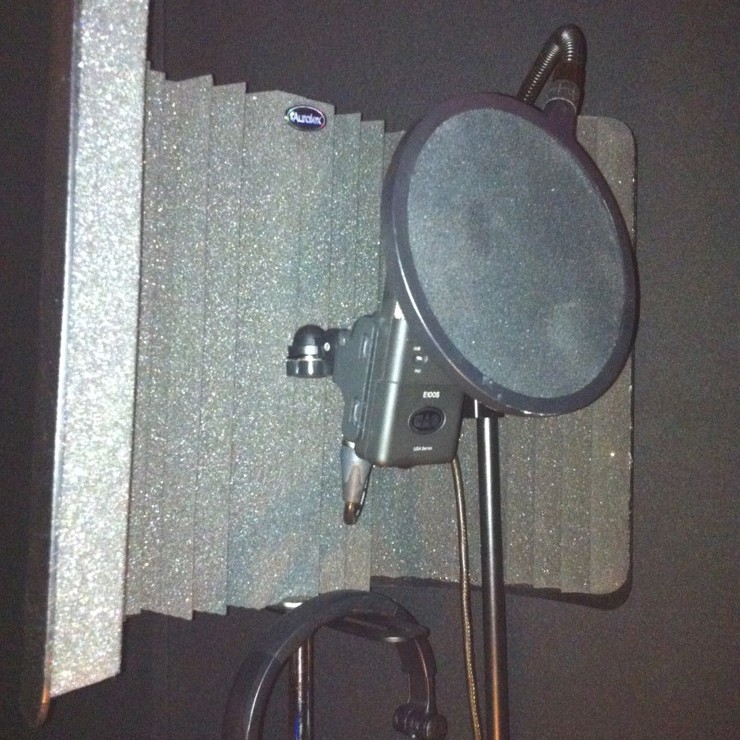 One of the major benefits I’ve found in using the Mudguard for vocal recording is that I can safely (or more confidently) track with the monitors on. I get enough isolation that I can even keep the studio window cracked open and a fan running so we don’t over heat. These simple adjustments for comfort have not resulted in extraneous noise in the recording. It’s not going to get you a bone dry vocal in an untreated room, and sure it’s not as good as a bunch of thick moving blankets or rigid fiberglass panels, but for it’s size and cost some sort of product like this can be helpful even in already treated rooms, and is especially recommended for recording vocals in the control room.

Please note: The majority of this review excluding the final section were written shortly after purchase. I wanted to thoroughly test the product before publishing.