Guest Post: How the LP (and the 45 single) Were Born

It turns out that next year will mark the 65th anniversary of the vinyl LP, and even after all that time the format is – after a lull in popularity – growing more and more popular again every year. We learned of the birthday of the LP from a new book, “360 Sound: The Columbia Records Story.” As the title of the book would suggest, it is largely focused on the overall story of Columbia’s 125 year history, as well as the artists on the label including – Frank Sinatra, Bob Dylan, Bruce Springsteen and Beyonce, among many others.

But an excerpt from the book reveals the interesting history of how the vinyl LP was developed by Columbia and became the standard medium of music for decades. 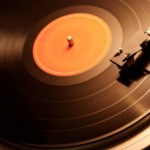 The LP as we know it today was introduced during a press conference at the Waldorf Astoria in New York on June 21, 1948. Columbia Records developed the new 12-inch medium from “unbreakable” Vinylite, and the album could hold 22.5 minutes of music on each side, spinning at 33 1/3 rounds per minute. This meant that an entire symphony could play on one vinyl album that cost $4.85, as opposed to a five-album set of 78s – the standard at the time – that cost $7.25.

And though it now seems a no-brainer that the industry would pick up on this new technology, the story gets interesting when Columbia’s rival, RCA Victor, refused to adopt the LP format.

Before the announcement of the LP, Columbia management went around to every record label with an offer to license the new technology. The thinking was that if all the labels adopted use of the new format, public acceptance would follow quickly. And while most record companies did agree, RCA held out.

And it wasn’t just a hold-out, it became an all-out fight when RCA released its own new technology in 1949: a 7-inch record that played at 45-rpm. Of course, we know this today as a single.

But RCA didn’t introduce the records as a single, they were meant as competition to the LP. At the same time the 45s were introduced, the company also unveiled a new record player with a large spindle that would hold multiple 45s. When one finished playing, the next would automatically drop and begin playing for an uninterrupted flow of music.

For the next two years, what has come to be known as “the battle of the speeds” raged, before RCA finally gave in and began producing its own 33 1/3 rpm LPs. The book reports that RCA lost $4.5 million during this time, as well as some valuable artists.

Of course, RCA didn’t lose completely, as the 45 became the standard format for pop singles, due in part to their popularity in jukeboxes. In fact, a year after RCA began manufacturing LPs, Columbia started making 45s. Today, the LP remains popular not for nostalgia purposes, but because it produces a much better representation of the way music was actually recorded than MP3s. If you have a need for vinyl or other audio mastering be sure to contact Sage Audio for a free sample!

This guest post comes from Drew Thomas of Sage Audio, a mastering studio in Nashville, Tennessee on legendary Music Row. Sage Audio provides high quality cd mastering services for all genres and artists all over the world through a user friendly online system. Expert mastering services start at only $34 per song and a free preview is offered to new artists so they can hear exactly what their songs will sound like after professional mastering.