My review was first published on The Home Recording Show episode 161 with guest Sean Costello (ValhallaDSP). The discussion after the segment is equally geeky and entertaining.

Valhalla UberMod is a unique multitap delay and modulation plugin. The various algorithms allow from 2 to 32 modulated delay taps. Ubermod can be used to create lush choruses, tape and bucket brigade style echoes, reverbs and many strange other effects. Ubermod costs $50 and is available for OSX and Windows, VST, RTAS and AudioUnit; 64-bit ready.

After my gushing review of ValhallaRoom on The Home Recording Show # 147, I got in contact with the creator Sean Costello and dove head first into UberMod. I’ve been trying out Valhalla UberMod for over a month now, and it is surprisingly hard to get my thoughts on it written down. 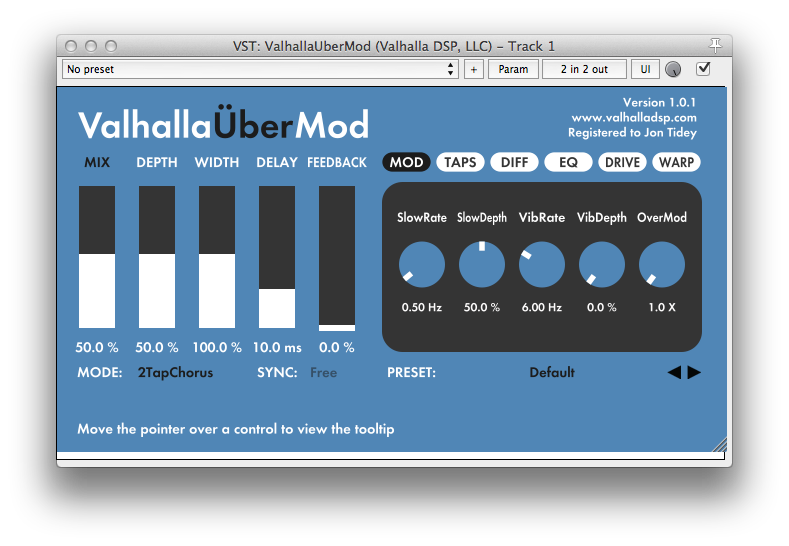 UberMod looks simple but its really a very deep plugin. I spent a few evenings just getting used to how it works and trying things out. I eventually gave up trying to control it completely and just let it do it’s weird and wonderful things.

There are 9 modes in the current version (1.0.1) inspired by vintage hardware effects from Eventide and the Roland Dimension D and various vintage synthesizers. The algorithms in UberMod expand upon the concepts of the old hardware and take them to the extreme. What happens when you run 8 Dimension D’s in parallel? That’s the 16-tap mode.
There’s an explanation of the various modes on the KVR Audio forum and also on the Valhalla Blog.

Sean Costello
All of the modes have their inspiration in various “vintage” boxes, but got combined and recombined as I saw fit. I’m a historian when it comes to signal processing, but I also take a postmodern approach. The past is a place to take inspiration from, but it isn’t like the audio industry reached some Platonic ideal a few decades ago. Emulating the past in precise detail doesn’t really interest me, and I’m not aiming for strict emulations with any of the ÜberMod modes. I’d rather take the good ideas, mix them up with my own good ideas, and create some crazy chimera of a plugin that leaves the realms of sanity behind.

Starting off with the presets is highly recommended with this effect, in fact sharing presets is encouraged. The preset browser has a clipboard copy and paste function. In the discussion threads at KVR Audio and Gearslutz  you will find dozens of presets shared by users. Its a great way to find out what this beast can really do. Some of these shared presets are pretty insane.
Once you find a preset you like, try changing the mode or tempo sync or color mode to quickly discover several new sounds.

I’m currently using Ubermod on synths, strings, acoustic guitar, bass guitar, and vocals. If you want 80’s hair metal chorus leads it can do that too, but you don’t want to do that.

The only thing UberMod doesn’t work well on is percussive sounds, it’s just not the right sort of effect. Try it with a basic synth. Insert it after a synth 50% wet and it’s just instant fatness.

Moar Examples
Now some examples from some of my recent mixing projects.
Here’s some mono acoustic guitar where I’ve used Ubermod to spread out the sound an make it more interesting. This is a chorus sound with the width at about 120% and mix around 20%.

First dry, then with ubermod, then in the mix.
[audio:http://audiogeekzine.com/wp-content/uploads/ubermod/acoustic_uber.mp3]

On a different song I used UberMod to separate the harmony vocals a bit more from the lead, this is similar to something like Waves Doubler, it sounds a bit weird on it’s own but works in the mix.
[audio:http://audiogeekzine.com/wp-content/uploads/ubermod/vox_uber.mp3]

Now just for fun, one of those cheesy chorused lead guitar solos. Do not try this at home.
[audio:http://audiogeekzine.com/wp-content/uploads/ubermod/gtr_uber.mp3]

I have one more set of examples. This is from a really strange sludgy metal song with some of the weirdest vocals I’ve ever heard. But they weren’t weird enough. I used an automated Ubermod in parallel with a huge reverb from ValhallaRoom.
First just the vocals with fx then the full mix.
[audio:http://audiogeekzine.com/wp-content/uploads/ubermod/ubermelvin.mp3]

Final Thoughts
UberMod will not replace your other delay, chorus, flanger, doubler and reverb effects, but it sounds unique enough from your other options that you’ll find yourself wanting to use it more and more. The more I use Ubermod, the more I find it essential. Ubermod is my go-to effect for fat synths, vocal doubling, and anytime I need something slightly insane. The audio geek approves and highly recommends Valhalla UberMod.