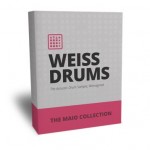 This drum sample library features acoustic drums recorded through an API console and Studer A820. This is a bundle of over 150 hard hitting, preprocessed, one-shot kicks, snares, toms, hats and cymbals for hip-hop production.

Head over to the site to hear some of the samples in this package. A demo song is below

The Maio Collection boasts over 160 professionally recorded acoustic drums that hit every bit as hard as synthetic drums while retaining the character, quirk and texture of natural drums.

Growing up on 90s Hip-Hop, I fell in love with the texture and character of drums that were chopped from breaks and programmed in vintage samplers. But around the late 90s, early 2000s, synthetic drums became the popular sound: cleaner, crisper, harder-hitting.

My goal is to reinvent the sound that I remember in a new way and make natural acoustic drums sound as unique and crisp as synthetic drums.