Last month I finally found the time to finish one of the DIY projects I’ve had on the go for months. The project was turning a Sony Walkman into a nasty distortion box and I’m really happy I finally finished it. 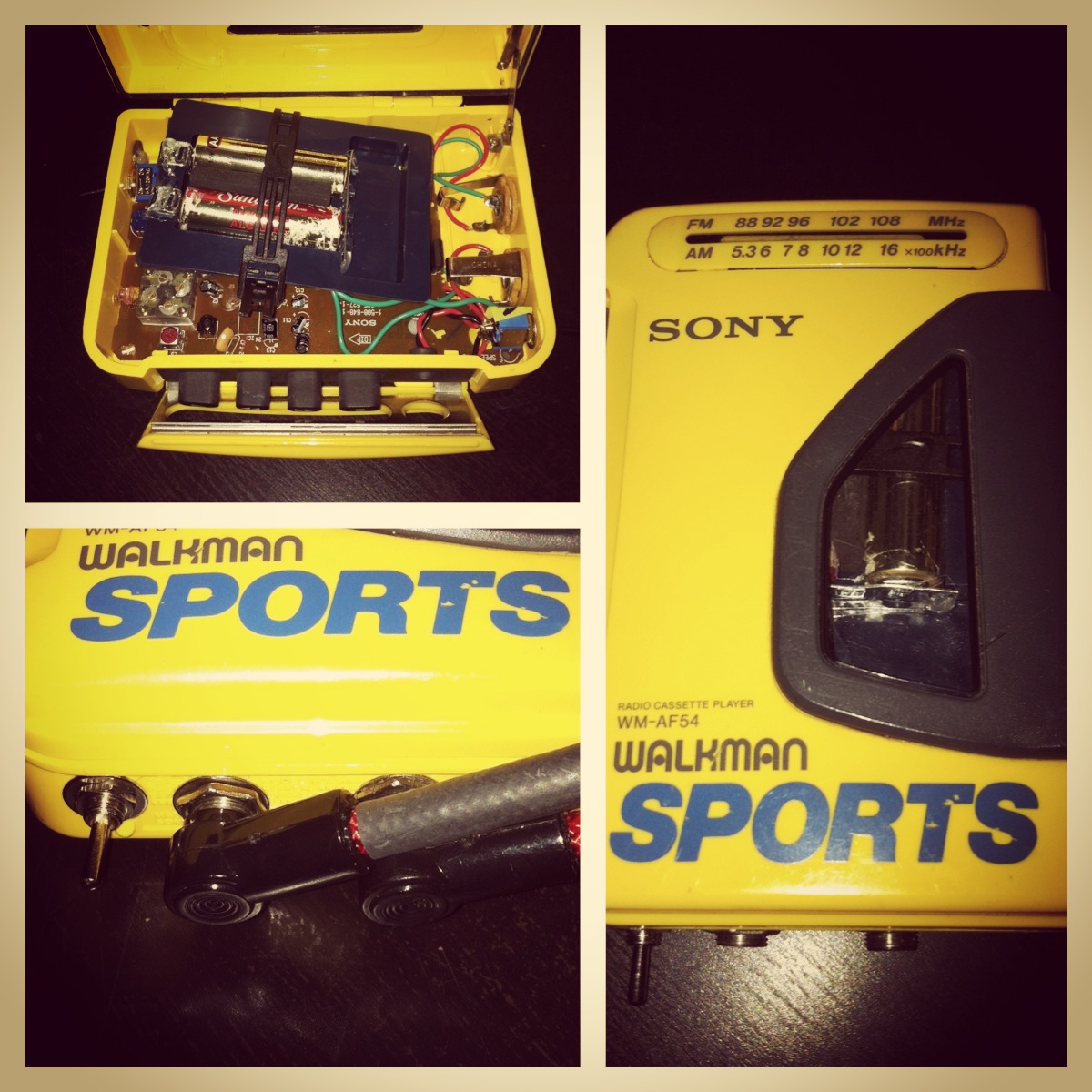 The concept is simple. Remove the mechanical guts, replace jacks and overload the Walkman amplifier to create distortion. It’s not a tape distortion but I can do that in a different project. Any portable cassette player will work. I like the Sony Sport for it’s great rugged case and memorable look. A player with EQ controls, bass boost or other enhancements could be helpful.

Step 1 – Remove guts
Remove the tape mechanism, tape head, radio antenna, and extra plastic parts. Take note of where the tape head attached to the board and points that the play switch connected.

Step 2 – Power
A power supply is needed for testing and it should be removed before any soldering. Batteries heat up fast! Attach the power with alligator clips to the circuit board. Solder the play control points to the on position to keep the power always on. Solder a switch on one of the battery leads to cut power.

The most difficult part of the build was creating a battery holder for the two AA. Several hours of trial and error went by before I found a reliable solution. If you attempt this project I recommend buying a AA battery holder because they’re very tricky to fabricate.

Step 3 – Solder Jacks
Replace the 1/8″ TRS jack with 1/4″ TS jack. Simply desolder the jack, run leads into the board from the jack.
The input jack replaces the tape head. I soldered right to the legs of the opamp. If you connect the ground first, you can just poke around with the hot lead until input reaches the output. This is a good way to troubleshoot or experiment. I also removed the volume control pot and shorted it to full volume.

Step 4 – Test and experiment
Now that you have the power, input and output connected, run some sounds through it. Mine did very little with a guitar connected directly to it going to a small passive speaker. Taking a signal from my audio interface in gave me plenty of level to work with, in fact I could drive a 8ohm 12″ speaker at a healthy level. This is a good time to try circuit bending. I kept things pretty simple and just added a switch to bridge the channels for increased gain.

Reamping a monotron through a walkman. Distortion! vine.co/v/bgY0EFVIJVl

In the example clips below I recorded some sounds out of my Korg Monotron Duo then reamped the audio through the Walkman distortion.


I am very happy with how this turned out and is a very usable effect for some sources. I think it works particularly well for dirty synths like the Monotron. The entire build would have been much faster if only I had that battery clip. You could probably do this in under an hour if you don’t get carried away with testing and making noise like I did.

What do you think of this project? Is this something you would build? Do you want to hear examples of it on other sources? Let me know in the comments!

Published in Interesting and Tutorials